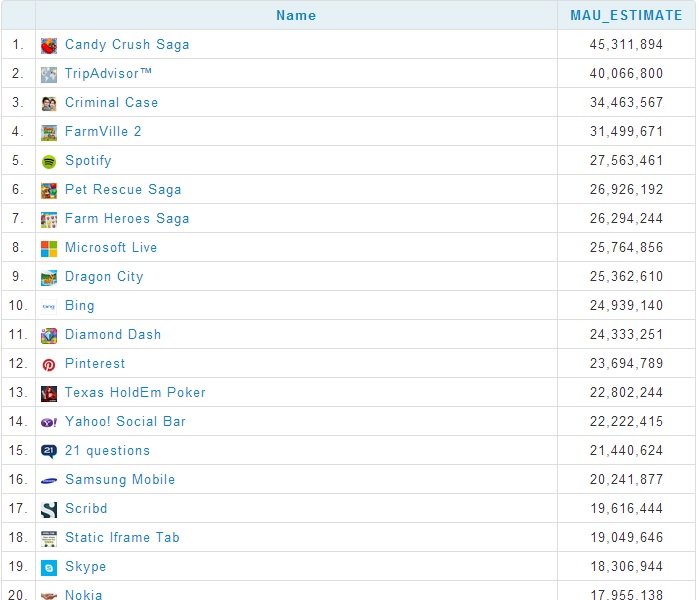 4 factors that made facebook application developer jobs on high demand

The number of facebook users are increasing day by day. Currently its recorded that 1.15 billion registered users are there in facebook. Its not just about the users, but the time spent in facebook also. Statistics shows that an average internet user spends 6.5 hours a month in facebook while he spends only 20 minutes per month in twitter. Pretty big difference ,huh?

Lots of succesful applications has been released, especially in the past year . Have a look at this image of the most popular facebook applications in this year and their monthly active users count.

Intsagram was having around 3 million monthly active users in the beginning of 2012 or late 2011 which turned into more than 40 million when it reached 2013 beginning. Similar is the case of Phrases and Farmville which also have nearly 40 million mau. Candy Crush Saga, got on top of the list recently with 45 million MAU. Candy Crush Saga is really simple game matching the similar candies. The sleeky, attractive designs and interaction of friends made it popular.These clearly shows as an increased demand for facebook applications or an exponential growth in fb apps.

Facebook brand building is now the most cheapest and effective medium of brand building. If it goes like this , there will be days where in which we could equate advertising to facebook marketing itself. Increased job oppurtunites for SMO (Social Media Optimizer) brought lots of talents into facebook which in turn resulted in many creative ideas and startups. Most of the jobs offered for facebook application developers are from companies who act as “Brand Building agencies” through facebook. Most of them needs fb app developers to promote the brands which they are working on. A facebook application developer in these companies  might be tasked to

Well, the list is not complete, but this gives you a general outline of  what you are supposed to do.

You do have multiple options to make money through facebook applications

1. Advertise in your application

The more your vistors the more the advertisement values. Eventhough google adsense doesnt support fb apps, there are lots of other advertisment programmes which support it.

You can now start your ecommerce in facebook. Payvment helps you to start your stores in .facebook. The major advantage is that the user doest gets out of  facebook and can buy things staying inside facebook. LiveScribe, a store for smart pens is a good example for facebook ecommerce

This is another trend which is growing on. People do develop applications and sell it. Once it gets some Monthly active users , it turns into an asset. And for sure you can sell this asset.